I Believe in Unicorns by Michael Morpurgo

I Believe in Unicorns immediately invites us into its world. We are in a village and, as we know, that village is rebuilding its library. The children have been asked to bring books for a book-swap and these instantly become returned library books, joining the piles and piles of children's books that make up Kate Bunce's exquisitely designed set. This is the setting for a piece of didactic theatre with a clear message for its young audience: that they should read books, visit libraries and cherish the ideas that they find within.

The show's story concerns Tomas (Michael Imerson), a storyteller who has returned to the village where he first discovered the joy of reading from a librarian (Danyah Miller) with a magical gift for storytelling. The importance of their shared passion is thrown into sharp relief when their village is invaded by soldiers who, in a wonderfully realised sequence centred on houses that pop up from the centre fold of books, raze to the ground many of the settlement's homes and, crucially, the library. The execution of this central sequence has a real sense of jeopardy, with the audience forming a human chain to speed the books to safety.

Whilst the show's message is infectious, it is somewhat emotionally exploitative: the use of war as merely a device in this kind of argument might raise an eyebrow or two. Especially since there is no clue that the play with its Anglo-centric catalogue of books is set in a region of the world likely to suffer the sacking of a village. As the librarian recounts how her father was beaten by soldiers for not relinquishing his most-treasured book, the element of sales-pitch in the show – it is, after all, sponsored by Waterstones – becomes rather uncomfortable.

Yet in other ways the show seems bold and radical. There's a secular retelling of the Noah's Ark story, which parallels the devastation of the flood with that of the invading soldiers; and the book-swap – the kids will leave with different books to those they came with – creates a nice communality. This, combined with the performers' obvious charisma, creates a show that's fun and surprising. There is also much to be said about the set, with all sorts of props and contraptions hidden within those mounds of books.

Since the success of War Horse, Morpurgo seems like a safe bet for family theatre. You are unlikely to be disappointed with I Believe in Unicorns. There are stories, there are songs, there are surprises and, at the very least, you can leave with a new book.

Tomas hates books but his world is turned upside down when he meets the Unicorn. Help Tomas save his burning library. Interactive show which changes daily. Bring a children's book to swap. 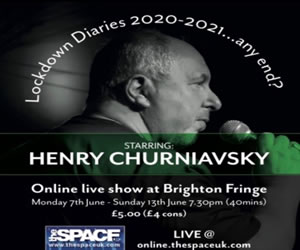