Falsettos has been around since 1992, but it’s UK premier has only just opened at The Other Palace, London. Despite winning two Tony Awards from its seven nominations, albeit one for the book, there are probably several reasons why it has languished for twenty-seven years before emerging on this side of the Atlantic.

It's 1979 in New York City and Marvin (Daniel Boys) is feeling the after-effects of his divorce from Tina (Laura Pitt-Pulford) and the consequences of choosing to live with his boyfriend, Whizzer (Oliver Savile). In an attempt to reconcile herself to the situation, Tina is persuaded to seek help from Whizzer’s psychiatrist, Mendel (Joel Montague) (poor judgment on her part, conflict of interest on his?) who falls in love with her (unprofessional conduct?). Eventuality she succumbs to his advances. Marvin naively believes he can hold everyone together around his son, Jason (Albert Atack, Elliott Morris, James Williams and George Kennedy in rotation), though he can barely cope with the tensions of his new relationship. In the second act two lesbian neighbours, Charlotte (Gemma Knight-Jones) and Cordelia (Natasha J Barnes) appear but add very little to the mix, in contrast to the emergence of AIDS as a final ingredient, which turns out to be significant.

The origins of Falsettos lie in William Finn’s In Trousers, which he put on stage in 1979. This was followed by a reworked version in 1985 played Off-Broadway, like its predecessor, where it received only sixteen performances. In collaboration with James Lapine, Finn went on to create two more one-act shows: March of the Falsettos in 1981 and Falsettoland in 1990. Effectively they formed a trilogy revolving around the character of Marvin and were ultimately combined to form the current two-act musical.

Traces of its hybrid background persist and overall it lacks focus. It has a Jewish context, yet this is of little specific significance other than it permits lengthy debate about whether or not the boy should have a ceremony for his Bar Mitzvah and if so where, with the outcome being blatantly obvious and entirely predictable. Would it have made much difference had it been about an Italian Catholic boy’s first communion? Probably not. The insubstantial libretto and storyline allow little room for the development of emotional ties or depth of characterisation. The whole is a cursory and superficial foray into a range of domestic and social issues. The show cannot help being a product of its time and while the world has moved on from the scary early era of HIV infection and AIDS, even in its day the coverage must have seemed watery.

The cast display sincerity in their performances and an obvious desire to sound convincing in the relationships around which the play revolves. Their words come over clearly in a work whose musical style is standard Broadway, with obvious harmonies and easily-forgotten melodies. Pitt-Pulford gives a gutsy and humorous rendition of I’m Breaking Down and the young Kennedy remains cheekily endearing throughout, making the most of My Father’s a Homo. They are highlights, but there is not a memorable tune anywhere to joyously sing on the way home.

Directed and choreographed by Tara Overfield-Wilkinson, with designs by PJ McEvoy, lighting by Nic Farman, sound by Chris Whybrow, musical direction by Richard John and musical supervision by Mark Crossland, the show has its glitzy moments with powerful vocals and vivid lighting; the scene-setting images moving in and out of the picture frames that surround the stage. The band, hidden aloft, packs a punch, without being intrusive or drowning the singing.

As a piece of musical theatre history it might appeal to aficionados of the genre who want to tick another box, but otherwise it’s a rather bland piece, struggling to be more substantial than it is that feels a little tired and drawn out.

Keeper Of The Flame

The double Tony Award winning Falsettos is a hilarious and poignant look at a modern family revolving around the life of a gay man Marvin, his wife, his lover, his soon to be bar mitzvahed son, their psychiatrist, and the lesbians neighbours.

Originally created under the spectre of the AIDS crisis, this ground-breaking musical about family dynamics manages to remain buoyant and satirically perceptive even as it moves towards its heartbreaking conclusion.

Selladoor Productions, producers of 9 to 5 The Musical, Big Fish, American Idiot and Avenue Q, bring Falsettos to London for the very first time serving as a timely reminder that love really is the most beautiful thing in the world. 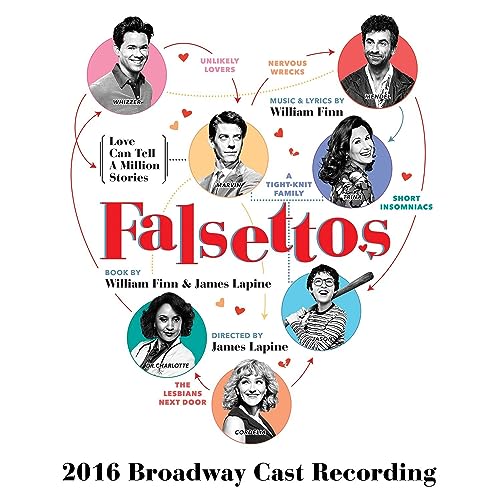